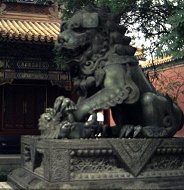 Confucianism isn’t a religion in the strict sense of the word as it doesn’t advocate belief in any particular type of god. It is, however, an ethical philosophy, a code of morality on how to react with other people which should lead to a happy life.

Confucius had two main ideals – that all people should be true gentlemen, whatever class they might be from, and that they should maintain proper conduct towards others whilst doing so. He wanted to reform government so that the welfare of the people was paramount and trained men who would be able to take high governmental positions and lead by their

example of personal virtue. By following his philosophy, they would earn the respect of ordinary people.

He took the term ‘chun tzu’ which is literally translated as an aristocrat and used it as the ideal for every man to work towards, whatever class they might be from. Its basic meaning became a ‘true gentleman’. He believed that every true gentleman should have five qualities – integrity, righteousness, loyalty, altruism and goodness (jen). Jen can be translated as humanity or respect and loving-kindness to others. He felt that if everyone tried to live up to these ideals the world would become a peaceful place.

The second ideal was that of proper conduct. Confucius believed that the practice of social etiquette or li should be followed. The four main tenets of li were the basics of his teaching: