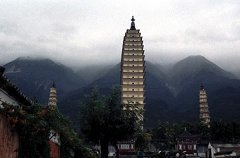 Although short, the Sui Dynasty was important as it finally brought China back to being one centrally-controlled empire. Wendi declared himself Emperor having defeated the Northern Zhou, centralised the government, reinstituted competitive exams for bureaucrats (which continued for 1300 years), reformed the tax system and conquered the south establishing his capital at Chang-an. Land was redistributed to the peasants dependent on the number of people in each family and was considered to belong to them although they were not allowed to sell it. He standardised the currency and weights and measures. The Silk Road was re-established and the reputation of China was greatly increased in Asia. His government was stable and took the ideology of Buddhism and Daoism as the state philosophy rather than the Confucianism of the past in order to unify the peoples from all different cultures and customs. 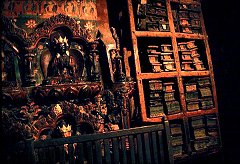 His son wasn’t so wise and economic problems under his rule brought an end to the Dynasty. The people resented the compulsory labour and huge tax burden of rebuilding the Great Wall and the construction of the Grand Canal, built to link the Yellow River with the agricultural Yangzi River valley. He waged expensive military campaigns against northern Korea, went on frequent extravagant pleasure trips and built a luxurious new capital in Luoyang so the people rebelled. He retreated to Yangzhou and Li Yuan, one of his generals, conquered Chang-an and declared himself Emperor and the Tang Dynasty began

The Emperor campaign, A Time of Grandeur, covers both the Sui and Tang Dynasties. After 300 years of disunion and strife, the kingdom is united again. Chang-an, the ancient capital of the Han Dynasty, is to be rebuilt with a Grand Pagoda whilst you learn about tea culture to keep your people happy. The marching of armies during the 3 Kingdoms period was very hard on agricultural land and there is still much hunger. Once his capital is beautified, the Emperor decrees that farming colonies are to be built along the western border and you are given Lanzhou to develop whilst keeping watch for invasions by fierce tribes from Tibet. The first Emperor dies and his second son has inherited the throne. You are sent to Yangzhou to build part of the Grand Canal. When completed, commercial products, food and troops can be moved efficiently, although at a very high cost. Thence you go to Liangzhou, a desert oasis on the western frontier where the earthen Great Wall has severely eroded over the centuries. You are to rebuild it with stone as well as restoring the Silk Road by gathering new trading partners. There are stirrings of discontent as the people have been pushed too hard too fast.

The co-operative multiplay mission, The Grand Canal, is also set during this dynasty. The Grand Canal is to be dug between Hangzhou on the east coast and Luoyang on the Yellow River, then northward to Yen. You co-operate with your fellow city leaders for construction materials whilst also stocking the palace with animals.