The Han Dynasty is normally regarded as being split into three distinct periods.

The Silk Road represents the entire Han Dynasty in Emperor although no scenario is actually set within the Qin period.

The Western Han Dynasty was founded by a commoner, Liu Pang, who was one of the rebel generals who fought the Qin. He renamed himself Han Kao Tsu and built his capital at Changan. The Han continued the stable centralised government of the Qin but were much more aware of the conditions of the peasants as they subscribed to Confucianism rather than Legalism which meant that they chose only competent men for office, with written examinations, and a university was established to prepare students. New discoveries were made such as how to make paper, the beginnings of porcelain and even a primitive seismograph. They gained control of the Silk Road along which trade could be made with the Roman world. However the northern nomadic tribes were always troublesome and it was economic problems resulting from the constant warfare that signalled the end of the first part of the Han Dynasty. The war was expensive and they depended on taxation for a large part of their income but the wealthy started to avoid paying tax, making the tax burden on the peasants impossible. The peasants had had enough and revolted. 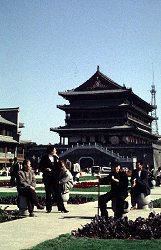 The Emperor commissions you to build his new capital, Chang-an. It’s to be an impressive city but with the capactiy to produce a lot of food as famine is a problem throughout the Empire because of the constant warfare ruining farms. The Xiongnu still threaten, but may be appeased if their demands for silk are met. On the other hand, they may not. Three generations later you return to Annam, to build a strong and impressive city. Meanwhile, back in Chang-an you are made Commissioner of Trade. An envoy has returned from far-off lands to say that they prize Chinese goods, particularly silk. You are to oversee trade, sending silk in return for their jade and spices. This is the beginning of the Silk Road. The Emperor also wishes a Grand Tumulus to be built ready for when he needs it. The Xiongnu are still threatening, but the Emperor wants to expand his empire north and east and wants a new city built at Lo-lang. The Korean natives are not friendly, so weapons and troops are necessary as well as creating a Great Temple to impress them. Finally you are sent to the Taklamakan Desert to establish a trading village at Loulan. 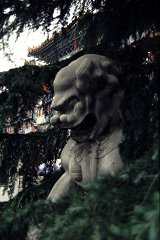 Wang Mang deposed the infant Emperor and declared himself Emperor with the intention of sorting out the unfairness between the classes. Slavery was abolished and state monopolies on salt, iron and coins were strengthened. Land was taken from the rich and given to the peasants. His ideas were good but his military was weak and the northern barbarians took advantage of this and conquered large parts of the north. Nature took a hand too and a series of floods destroyed the irrigation system causing widespread starvation. A peasant secret society, the Red Eyebrows, started a revolution in 18 AD and finally, five years later, captured the capital and executed Wang Mang. Unfortunately there was no-one obvious to take over as Emperor so there was a further 2 years’ fighting between the different factions until a wealthy landowner, Liu Xiu, with a large army seized the government and, since he was related to the previous Han rulers, he declared the Han Dynasty restored.

Right from the start there were problems with adminstrative weakness and inefficiency. The country was very poor and Liu Xiu tried to reform it by lowering taxes and rebuilding the irrigation systems. A little later Emperor He repealed the salt and iron monopolies and encouraged bronze and textile production. As a result trade reached new heights. Buddhism was imported from India in the 1st century.

However, as had so often happened before, the government split into different factions – the eunuchs and the bureaucrats being the two main ones. A Daoist sect of the army called the Yellow Turbans (so called because they tied yellow scarves round their heads) rebelled and it took over thirty years to pacify them. The government couldn’t deal with a population shift from the northern Yellow River to the southern Yangzi and, the downfall of many other Dynasties, they couldn’t control the northern barbarians (the former being a result of the latter). There was a small rebellion in the north and they lost control in the provinces so Emperor Xian abdicated in favour of Caopi who proclaimed himself first Emperor of the new Wei Dynasty.

The flooding of the Yellow River and resulting famine during Wang Mang’s reign and the sacking of Chang-an, a new capital is to be built further east at Luoyang. You are also to reinstate the Silk Road. Once successful with this, you are to go to extend the earthen Great Wall west. The Xiongnu are still a problem and the Silk Road is under threat. Steel has now been discovered so at least your weapons will be stronger. Finally you return to the capital of Luoyang. Buddhism has been brought to China and you are charged with ensuring that it is spread throughout the capital. Paper has also been discovered and can be made by soaking, pulping and drying hemp. However the Dynasty is coming to an end. A large revolt, 300,000 strong, was barely crushed then a few years later a general was murdered and the Emperor taken hostage. He finally abdicated and the Han Dynasty ended with the empire split in three.